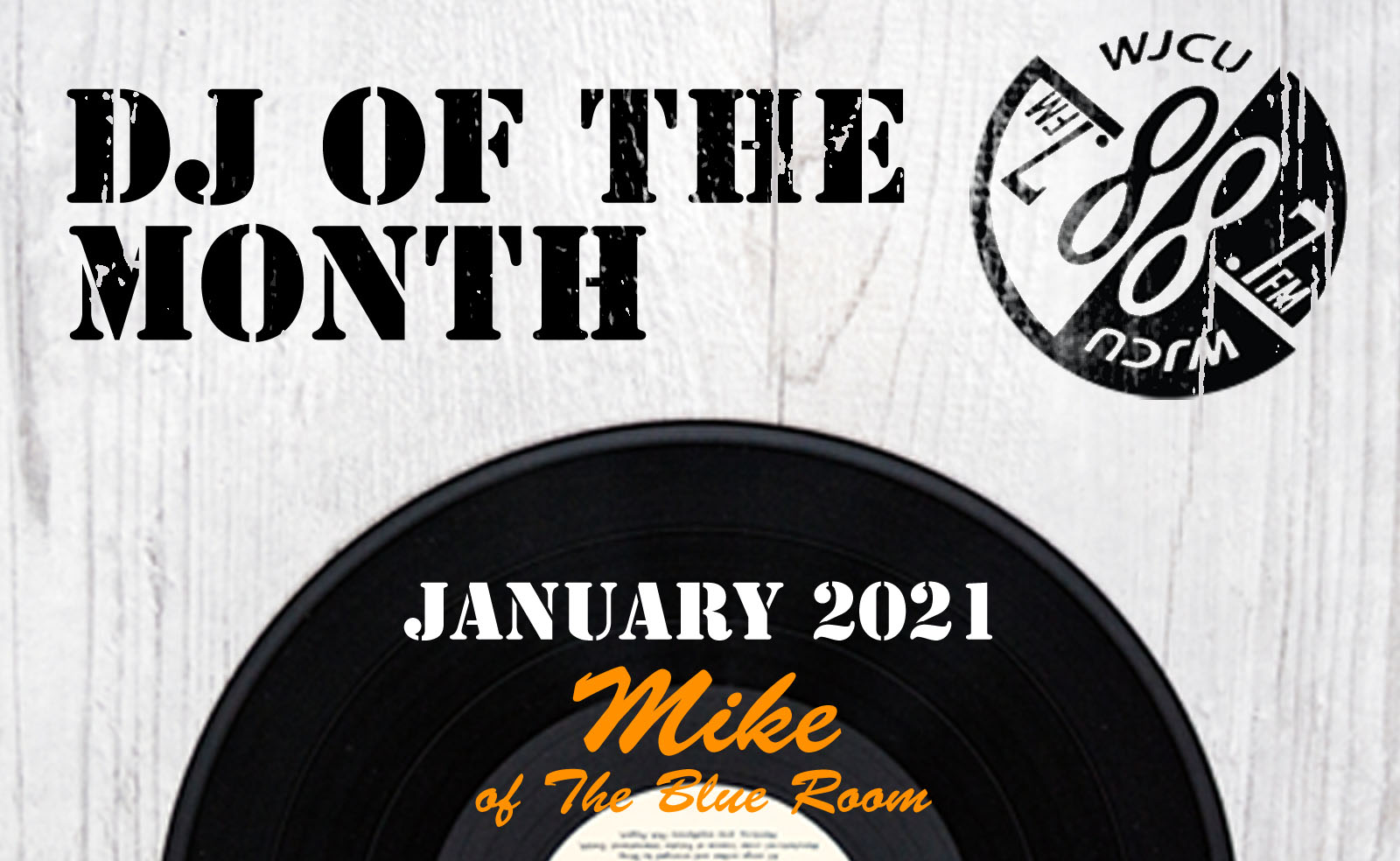 Join us in congratulating Mike of The Blue Room, as our first DJ of the Month in 2021 for the Month of January! Hear how Mike discovered his love for blues, some of his favorite artists and how much he enjoys hosting a show on a college radio station.

Q: Where did your interest in blue begin?

MIKE: Growing up in the 60s, I was about seven years old when I totally got hooked to The Beatles, in about 1963. That was the first album I ever bought, “Introducing…The Beatles.” And then my neighbor, who also loved The Beatles, we were the same age and he had a great stereo system at the time. So I used to go over there with my “Introducing…The Beatles” and as a couple years went by he had a couple more albums so we would just sit down and pretend we were The Beatles. So growing up I kind of stayed in that type of genre with the rock and roll: The Rolling Stones, Led Zeppelin, The Doors. That was the era of music I was really brought up in. 65-75 were really huge influences on me for music in general.

As the years passed, when we got into the 80s, rock and roll – it was changing. You had the glam rock, you had all kinds of stuff going on. It was okay, there’s definitely some good stuff out there but I still always felt that 65-75 to me was the most creative era of music. And as it progressed – you had changes in the 90s with electronic music, indie music, all kinds of different stuff – I really didn’t gravitate toward that so I was trying to search, and the old rock – Led Zeppelin, The Rolling Stones – they incorporated a lot of the blues in their music.

I was searching for another kind of sound that I just couldn’t find in the new music. So at work I turned on a blues station on the internet and I totally got hooked into the blues. The first guy that really got me was Albert Castiglia and I actually got to be friends with him. He tours all the time, comes up to Cleveland all the time. Got to meet him. Got to know him. And he’s just a great guy. So I really got into the blues, and today’s blues is actually a lot like the rock and roll of the 70s era, which I can really relate to. So that’s the story of what brought me into the blues world.

Q: What inspired you to take that genre you loved and turn it into a genre show here at WJCU?

MIKE: One of my good friends is Doc (co-host of The Mixing Bored), we grew up together in University Heights. I know his whole family, we go back a lot of years. I always knew that he had the radio show on WJCU. So whenever we would hook up we’d always be talking music; it’s our love in life. So one day he called me up a couple years back and said ‘hey Mike, I think there’s an opening on WJCU, would you be interested?’ And I said ‘wow, I mean yeah I would.’ And so he told me to reach out to Spencer (operations manager), put something together, try to think of a show, think of what you would wanna do, a name for the show and present it and see if it happens. So I did just that and sat down with Spencer and Trent (former general manager) and we went over everything.

Honestly, I was very apprehensive because I’m not an expert. I had no experience getting on a microphone or radio station, but I really wanted to do it cause I thought this could be a really great experience. My first show, I remember cause I was scared to death, I’m on my own. I walk in there the place is empty. I’m looking at the board and all the buttons and I was scared to death that something would go wrong cause I wouldn’t know how to fix it. But once I started playing music on the air it was the coolest thing that I was able to play my music out over the airwaves and hopefully turn some people onto what I was playing. So Doc opened the door and I gotta give kudos to Razor (co-host of The Mixing Bored) because Doc being in Pittsburgh, it was Razor who was willing to train me. So I used to go up for Razor’s show and hang with him for two months before I started. He got me pretty prepared.

Q: Share with us some of your favorite artists in the blues genre?

MIKE: Well in the blues-rock genre – I tell yeah, it’s incredible how worldwide the music goes when it comes to the blues. There’s a couple guys from Germany, Thorbjørn Risager, he’s one guy from Germany, just an outstanding blues player. In fact, he’s got a whole band, I mean I think he’s got like 15 people on stage when he performs. Another guy from Germany I really like, Henrik Freischlader, who’s a guitarist and he does the lead vocals. He is another German blues player who is just top of the charts. There’s a guy from Australia, Rob Tognoni, I’m a big fan of his. And a couple guys…one from LA, he goes by Stoney Curtis and if you’re a Flintstones fan, Stoney Curtis was actually a character on the show and it was a play on Tony Curtis. But, the real Stoney is a really, really good blues artist. And I think one of my all-time favorites is Albert Castiglia.

Like I said though, there are just so many. The genre is still growing, there’s a lot of young guys coming out in the blues-rock world. It’s really been a treat to follow the transition cause the old rock and roll that I listened to, those are the hardest sets for me to put together because that era is over with. But with the blues it’s all new.

Q: Lastly, what does it mean to you to be named DJ of the month and what’s the best part about hosting a show on a college radio station?

MIKE: You know, unfortunately I don’t have a lot of opportunity to listen to WJCU during the day time but in the evenings I do tune into other people’s shows really to hear them. I like to hear their breaks and what they talk about, cause there are so many different genres that I’m not necessarily into but I am really interested in how the DJ’s present themselves. And I’m telling you, we’ve got quality DJs out there. So to be selected is really an honor because there are a ton of people I would have picked before me.

And as far as doing a show on a college radio station, it’s so gratifying first, just to be able to do it. I wasn’t sure I was even gonna be able to do this and I was actually very surprised at how long it takes to get comfortable sitting in a room by yourself and talking to a microphone. I wasn’t quite prepared for how long it would take to get comfortable behind a mic, but I think I’m getting there. I just really enjoy the challenge of it: picking out the sets, the music. I try to coordinate the songs to make them flow from one song into the next, so I do put some work into it. And again, to bring music out on the airwaves, it’s just different to be the one pulling the strings rather than just listening to someone else, so it’s really cool.

The Best of Our Knowledge

Every day, faculty members at schools and universities throughout the world are making discoveries that shape our ways of thinking and redefine our understanding of today's knowledge-driven society. Since 1990, The Best of Our Knowledge has highlighted breakthroughs across disciplines and across the globe, putting you in touch with the men and women at the forefront of their fields. Each week this program examines some of the issues unique to college campuses, looks at the latest research, and invites commentary from experts and administrators from all levels of education.
@12:30 pm w/Bob Barrett - Education, Colleges, and Research

Ready to go again in Lansing!

Hey WJCU listeners! Make sure you tune into either http://wjcu.org/captains or the WJCU-2 app to listen to the LCCaptains game tonight for their season opener against the Lansing Lugnuts at 7:05! @LCCaptains @LansingLugnuts

Sad to see you go, but wishing you all the best!! #WJCUfamily

This week is my second to last on-air show at @WJCU887 ... I'm continuing the podcast indefinitely; but it was just time open up the on air slot to someone new! Thank you WJCU for the 10+ years of airtime! xoxo