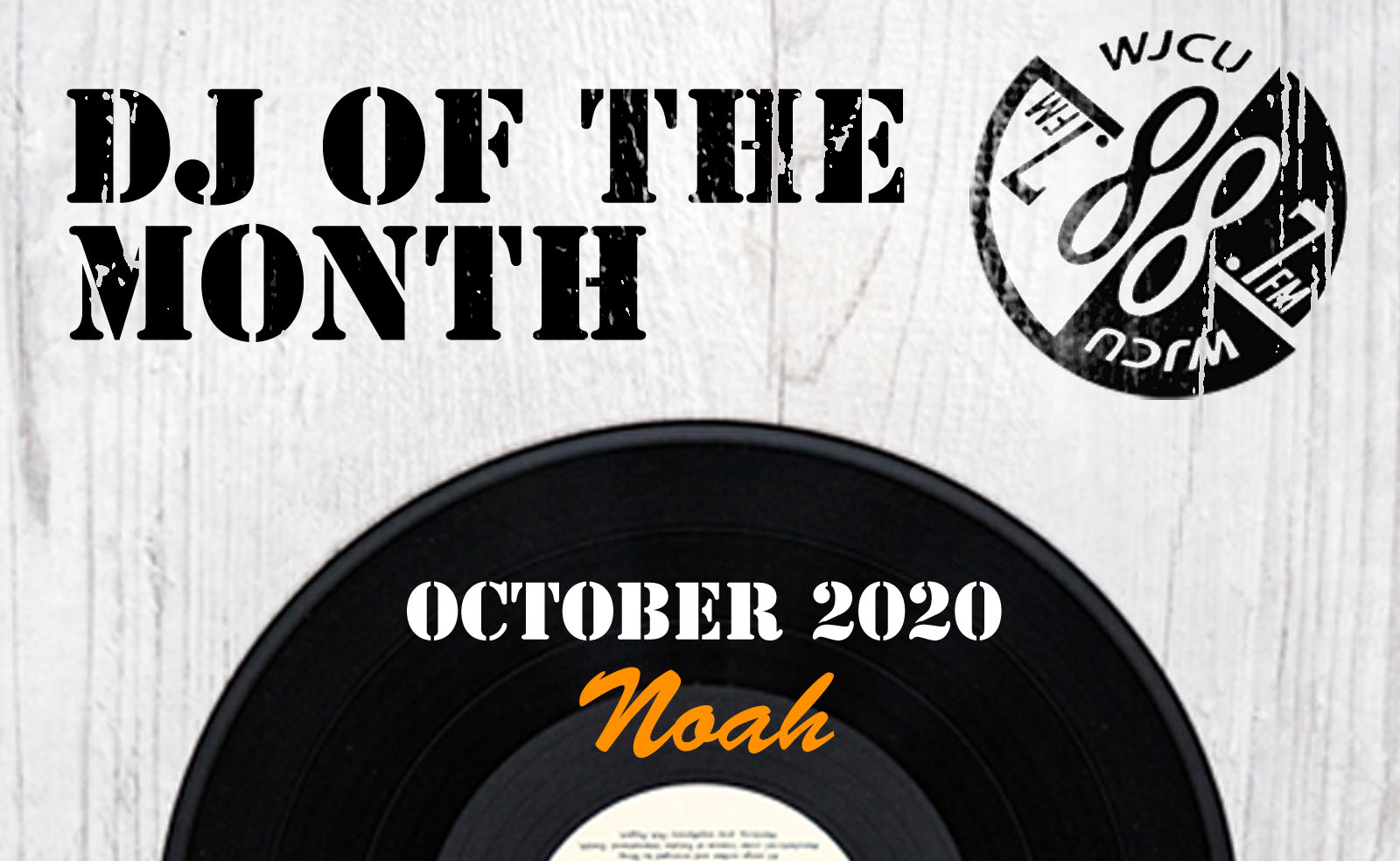 WJCU is thrilled to recognize one of our talented students with DJ of the Month honors. Join us in congratulating Noah, as our October DJ of the Month! Learn about Noah’s journey to John Carroll and WJCU, his love of sports and Bruce Springsteen below.

Q: First and foremost, how does it feel to be nominated by some of your peers to be our DJ of the Month for October?

NOAH: Well it’s truly a tremendous honor. I’m very, very happy, and very fortunate and blessed to be able to receive the DJ of the Month. It just makes me think of all the amazing experiences I’ve had here at John Carroll, especially here at WJCU. Since my freshman year when I got involved doing The Heights, from 3:30-6 pm on Monday’s — I’ve actually kept the same shift — and now as the station intern and being the sports director here, co-production director. It’s all come full circle and I really, really enjoy being here and it’s like a family. It just makes me think about all the wonderful relationships I’ve built here over the years and I’m very, very blessed and fortunate.

Q: Share with our listeners your journey to John Carroll and more specifically WJCU? Did you know you wanted to get involved with the station and what led you here?

NOAH: My journey actually begins at the University of Detroit Jesuit High School, on the Northwest side of Detroit where I graduated, class of 2017. And I was very, very involved in our ‘Cubs Sportscast’ — the UD Cubs, is our nickname — and we named the sportscast, which is for doing football, basketball, all that via online radio for a lot of our alumni. So I got involved my freshman year in high school with that and then by the time I got to be about a junior I became the president of our club. That is where I kind of thought ‘you know, I think I could do this for a career,’ and I kind of wanted to go somewhere, where I can get experience.

Now my mentor a UD, was a guy by the name of Matt Dery, who was a longtime sports voice in Detroit. But he was the one who helped me a lot, kind of fine tune some things my senior year and I got to thinking would you rather go to a big university be a small fish in a big pond, or go to a small university and be a big fish in a small pond? I also knew I wanted to go to a Jesuit University cause I was educated with the Jesuits at UD and I wanted a place where I would be able to call football games. Believe it or not there’s only five Jesuit colleges in the country that have football. John Carroll was one of them and it was close enough to home. And when I toured here for the first time, the first thing I saw was the radio station. I kind of fell in love with that idea and then I didn’t know until I was going into my freshman year of college here about the Sports Information Department so I grew into that area with the late Chris Wenzler, but really my start with knowing I wanted to come here was because of WJCU. I started out Freshman year, doing social media for the football games and then working my way up to eventually calling and broadcasting games.

Q: What would you say is the best part about being involved with a college radio station like ours?

NOAH: Well in terms of my career, you talk about being a one trick pony and only focusing on one thing. Here you can focus on many different things. You know, obviously we are more of a music station, we have our genre shows, we have The Heights, but for me, especially with doing my Heights shift, it goes beyond just sports. I’ve learned a little bit about music. I’ve learned about the Cleveland music scene a little bit. I’ve done a live interview with Hunter Hayes before, a country artist, a couple years ago. So just learning more about music, broadening my interests outside of sports that has definitely been an important part in my growth on radio.

Q: On the sports side of things, what would be the best piece of advice you’d give a young aspiring broadcaster who is maybe trying to follow a similar path as you?

NOAH: Don’t be afraid to be yourself. I learned that back in high school, especially because there’s a lot of people who can just copycat off of each other, you know they could sound monotone and be very nervous and scared to be on the air. A lot of kids think just checking off boxes in terms of how to do something, but in radio it’s not really like that. You can be yourself. You develop a personality and you’re able to share that with others.

Like for me, for my Monday Heights shift, I remember thinking my freshman year, ‘I think I can do more than just say the songs that played before and what’s playing next’ during my mic breaks. Let’s take it a step further, we can talk about the history of some the bands. We can also do a Bruce Springsteen song of the week. That’s what I created my first semester because we had all this Bruce Springsteen music in the archives, why not end my shift on that? I’ve really like Bruce Springsteen for a while now and I just figured why not make it a tribute to something going on in the community or at John Carroll or in the world. So definitely I would say just be yourself and create your own niche on the air.

Q: I was going to ask you about the Bruce Springsteen song of the week…where did your love for The Boss come from and if you had to pick maybe a couple songs that are your favorite Springsteen songs, which would they be?

NOAH: To be honest, my love of Bruce Springsteen came when he did the halftime show at Super Bowl 43. That was one of the first Super Bowls I actually remember watching as a kid with my dad and I don’t really remember a lot about the game aside from the game winning touchdown for the Steelers, but the thing I remember most is the halftime show with Bruce Springsteen. My dad was up on his feet cheering and I was running all over the place as a young third or fourth grader and I remember thinking ‘wow this is really fun!’ And so ever since then I kind of stuck him in the back of my head. I’ll be honest, I’m more of a country music fan for a genre, but I’ve always appreciated that. And then when I came to WJCU I started to explore some more of his music. So hearing stories and reading articles online and listening to more songs made me fall in love with his music and I figured we have all these songs in our library and I know people love Bruce Springsteen so why not share that with everybody?

As far as a couple songs, I’ll say this, I really like 10th Avenue Freeze Out, which is one of the songs he played at the halftime show. I also like the song You’re Missing because I’ve though a lot about the people I’m missing in my life who have passed away like Chris Wenzler and others. So every time I hear that song I think of them. And then I just love Born in the USA too. We’re all proud to be Americans and I’m an Eagle Scout so I’ve always had a love for our country and I’d definitely say those three.

Q: What’s maybe your favorite memory from calling a game?

NOAH: There’s been a lot of memories and we’ve been very fortunate at John Carroll to have a lot of great sports teams. There aren’t many teams that have down years here. But I’d probably have to say to this day my number one memory calling a game was the 95-yard punt against Heidelberg a couple years ago. It wasn’t JCU punting it, it was Heidelberg who punted the ball from end zone to end zone. I had never seen anything like it before. Later that night I was doing PA for a JCU soccer game and all the sudden I started getting all these texts from friends saying ‘dude you’re on Sportscenter!’ So I was able to put that on my reel that I called a top ten play from 2018 so that was definitely my best memory I’ve had calling a game at John Carroll.

An hour of sports talk focusing on college and pro basketball. The show features a different guest each week.
@6 am w/Darrell - College and Pro Basketball

As part of a two hour block of sports talk on Saturday mornings, Kyle and Spencer get together to talk about everything going on in the world of football.
@7 am w/Kyle and Spencer - Football

Wishing everyone a Happy Thanksgiving from WJCU!

Happy Halloween from WJCU to you!!

Tune into the CBI NSEMC Cybercast to listen to a crossover between 808s and Mixtapes and Lake and Lean Power Hour on air from 4-5pm! Check it out at the link below!! #CBIconvention #NSEMCCybercast

Tune in this week for some new tunes on The Heights!

A jam packed episode is coming your way at 7 am on @WJCU887! @Spencito_ & @eddie_marotta have some catching up to do in the aftermath of the Christian McCaffery trade, an unexpected weekend of scores and more. Plus, they ponder are the #Browns fixable?